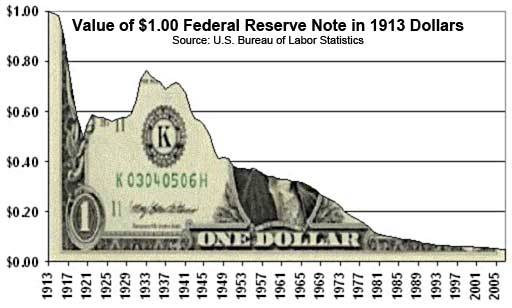 What Saved the Dow? Sensible Economic Policies ... As of the closing bell on Tuesday, the Dow was trading at 14,254—well above the previous all-time peak of 14,198, which the market reached on October 11, 2007. With investors increasingly optimistic about the economy, nearly four hundred issues on the New York Stock Exchange hit new highs. Sticklers will point out that, after accounting for inflation, stock prices are still more than ten per cent below their previous peak, but that's quibbling. Any way you look at it, during the past four years the market has made a remarkable recovery from the post-Lehman crash.- New Yorker

Dominant Social Theme: If not for monetary debasement, the stock market would have foundered.

Free-Market Analysis: This New Yorker article offers us tribute to monetary policy. But certainly there must be a question about manipulating stock averages up using increased money flows. The article ends by challenging free-market types to "acknowledge the success" of politics and the financial system generally in rebounding from the financial crisis and posting such stellar numbers.

Well ... as free-market types, we are perfectly willing to throw in a word of caution when it comes to where the market has been and where it is headed – Dow Jones, Nasdaq and similar US markets anyway. It seems to us that valuations of industry have increased validity when they are subject to investor sentiment rather than Federal Reserve monetary inflation.

In fact, the question becomes – as this article does not seem to notice – whether inflated averages are viable or ephemeral: That is, are they a valid indicator of performance or merely evidence of the power of the printing press. Here's more from the article:

... Take a quick historical quiz. How long do you think it took the market to regain its high after the stock-market crash of 1929? Five years? Ten years? Fifteen years? Twenty years? Keep going. On September 3, 1929, the Dow closed at 381.17, a level it didn't see again until November 23, 1954. That's twenty-five years, two months, and twenty days—more than a quarter of a century. The stock market's recuperation from the Great Depression took almost five times as long as its recovery from the Great Recession.

Will The Collapse Of Credit Suisse Be Europe's "Lehman Brothers Moment"?

The Federal Reserve is Raising Rates – Get Used to It

If supply chain crunch is finally easing, why is inflation so high?

We've "Crossed The Rubicon": Bear Traps Warns "Risk Of A Crash Is Rising"

With A 'Double Whammy' Hitting The System And The Market Going Down, Down Down, --

Hemp boom is over: Oversupply of hemp causes huge losses for farmers