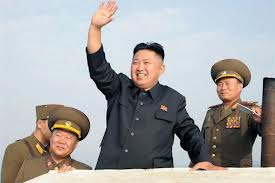 America’s west coast cities of Los Angeles and San Francisco are feared to be in Kim’s sights.

A foreign ministry spokesman said: "Since the United States is about to ignite a nuclear war, we will be exercising our right to pre-emptive nuclear attack against the headquarters of the aggressor in order to protect our supreme interest."

The UN today has voted implement its toughest restrictions yet on North Korea in a bid to halt its nuclear ambitions.

Secretary General Ban Ki-moon said: "The international community will not tolerate its pursuit of nuclear weapons."

The announcement comes on the day North Korea launched a chilling new propaganda film via its official Youtube channel.

The UN sanctions imposed today include a list of luxury items the country's rulers will be banned from importing.

"These sanctions will bite and bite hard,” said US Ambassador to the United Nations Susan Rice.

She added: "North Korea will achieve nothing by continued threats and provocations. These will only further isolate the country and its people and undermine international efforts to promote peace and stability in northeast Asia."

The nuke warning from North Korea was put out by the country's official news agency and accused the US of leading the calls for the crippling sanctions.

However experts doubt the country's ability to produce a warhead capable of being fitted to a long-range missile.

BREAKING: It's Happening All Over Again!

G7 Set To Impose "Price Caps" On Russian Oil; Unclear What This Actually Does

The 5 Best Chicken Breeds for Your Homestead