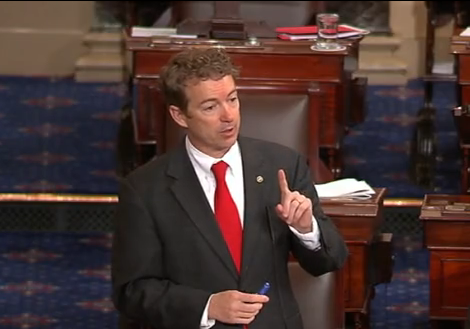 Sen. Rand Paul’s filibuster Wednesday to bring attention to drone strikes turned into a committee affair, with a dozen other GOP senators coming to the chamber floor to help carry the speaking load by asking long-winded questions, giving Mr. Paul a chance to rest his voice and stretch his legs as the others spoke.

and Mike Lee of Utah did the most to help, with Mr. Cruz at one point holding the floor for a single question that lasted 50 minutes.

Late in the evening Republican National Committee Chairman Reince Priebus even issued an all-hands alert for help: “Attention all Republican US Senators -> Please go to the floor and help out.”

In addition to Mr. Cruz and Mr. Lee, others who showed up and spoke included Sens. Marco Rubio of Florida, John Cornyn of Texas, John Barrasso of Wyoming, Jerry Moran of Kansas, Saxby Chambliss of Georgia, Pat Toomey of Pennsylvania

, Ron Johnson of Wisconsin, Tim Scott of South Carolina, Jeff Flake of Arizona and Mitch McConnell, the GOP floor leader, who made a late-night appearance to congratulate his fellow Kentuckian.