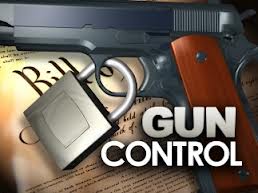 The Democratic-led panel had four bills on its agenda Thursday as lawmakers began shaping their response to the slaughter of 20 first-graders and six staffers in Newtown, Conn. The shootings elevated guns to a top-tier national issue, though many of Obama's proposals have encountered opposition from the National Rifle Association and many Republicans.

Besides expanding background checks, the other measures would ban assault weapons and ammunition magazines carrying more than 10 rounds, make gun trafficking and the purchase of firearms for people barred from owning them federal crimes, and provide more money for schools to buy video cameras and other safety equipment.

All four measures were expected to pass the committee, perhaps Thursday. But their fate when the full Senate considers them, probably in April, was less certain. The trafficking measure by panel Chairman Patrick Leahy, D-Vt., was thought to have the best prospects and the assault weapons ban by Sen. Dianne Feinstein, D-Calif., seemed to have the slimmest chance.

Democrats had hoped to reach a bipartisan deal on expanding federal background checks with conservative Sen. Tom Coburn, R-Okla. But on Wednesday, Democrats set aside their efforts to win over Coburn after weeks of talks failed to resolve a dispute over requiring that records of private sales be retained.