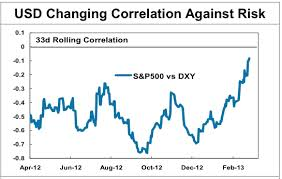 That's because during the crisis years, when people were in panic mode, they would rush to hold safe-haven dollars, dumping everything else. And then when they were panicking less, they would step out of dollars, and buy other stuff.

But the chart above means the crisis is coming to an end, or has come to an end. There's no longer this phenomenon where the dollar represents something you hold when you're panicking about everything else. You can buy stocks, and also feel eager to hold dollars.

In addition to the crisis mentality, the dollar just looks a lot better than other currencies. There's a feeling that Europe is going back into the gutter and the ECB has to do more. Japan is (as everyone knows) doing a lot more easing. Britain is crumbling again. So pretty much the US is the only place where we're talking about the central bank doing an exit.

This is an important trend that smart folks are picking up on.