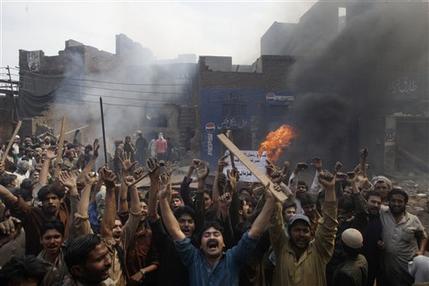 LAHORE, Pakistan (AP) -- Hundreds of Christians protesting the burning of their homes by a Muslim mob over alleged blasphemous remarks made against the Islam's Prophet Muhammad clashed with police on Sunday in eastern and southern Pakistan.

Around 150 people have been arrested for setting dozens of Christian houses on fire in the eastern city of Lahore after a non-Muslim was accused of making offensive comments about the prophet, police said.

Christians across the country rallied against the incident, but the main demonstrations were in Lahore, the southern port city of Karachi, the capital, Islamabad, and the adjoining city of Rawalpindi.

The Christian demonstrators blocked a main highway in Lahore and police fired tear gas shells to disperse the protesters who demanded assistance from the government, said police official Malik Awais. He said the protesters damaged several vehicles, uprooted a fence along the road and burned an electricity generator.

The Early Church and the State