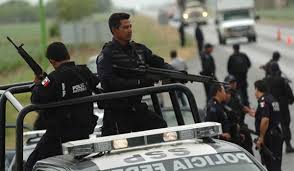 The opening clashes were reported just before 9 p.m. Sunday, when rival factions of the Gulf Cartel consummated what appeared to be a yet another rift within the criminal organization.

During the protracted gunbattle, dozens of gunmen were killed, but authorities Monday would only confirm the deaths of two bystanders and the injury of a third.

A Tamaulipas law enforcement official, who asked to not be named citing security reasons, confirmed that the death toll was about three dozen, however the exact figures were not known because cartel gunmen picked up their own people’s bodies during the struggle.

In a news release, the Tamaulipas Attorney General’s Office, known as the PGJE, confirmed that the two slain bystanders were a taxi driver and a teenager who was riding a vehicle with his father. The release confirms one person was injured and seven gunmen arrested, and it states that authorities seized 22 vehicles that were used in the melee, but it doesn’t mention any gunmen dying.

This 4th Of July: Requiem For Freedoms Long Gone?

Are US Weapons Supplied To Ukraine Ending Up On DarkNet Marketplaces?

Here We Go Again: The Fed Is Causing Another Recession

People Are Losing Interest in 'The Current Thing'

China May Be Plotting Moon 'takeover' As Part Of Its Military Space Programme, Says NASA

Declare Your Independence from Tyranny, America

White House Tells Americans: 'Suck It Up' For The Sake Of The "Liberal World Order

Gay conservatives exist and are having a moment in the US