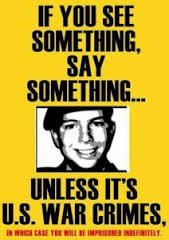 Even when their personal safety and freedom were on the line, these individuals spoke up, knowing they would be chastised, ridiculed, arrested, branded traitors and even killed.

Indeed, while brave men and women such as Martin Luther King, Jr., Henry David Thoreau, Susan B. Anthony and Harriet Tubman are lauded as American heroes today, they were once considered enemies of the state.

Thanks to the U.S. government’s growing intolerance for dissidents who insist on transparency and accountability, oppose its endless wars and targeted killings of innocent civilians and terrorists alike, and demand that government officials abide by the rule of law, that list of so-called “enemies of the state” is growing.

One such “enemy of the state” is Bradley Manning, an intelligence analyst who has been targeted by the Obama administration for holding up a mirror to the bloated face of American empire.