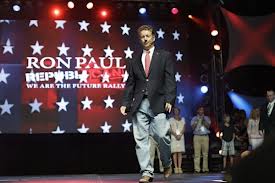 It would appear that Rand's staff was working with the GOP to stop our efforts to nominate Ron Paul:

"Right then a short, white-bearded man marched past Sen. Paul, over to his chief of staff, Doug Stafford. It was Ben Ginsberg—veteran of the Bush-Gore recounts, top legal macher for Mitt Romney, “the lawyer for the Republican establishment,” author of a new Republican National Committee rule that would bind delegates more closely to winning candidates. Ginsburg, carrying a sheaf of papers, leaned in and buttonholed Stafford.

“I’ve got your guys trying to put Paul’s name into nomination,” he said, pointing at the papers. “Right here, buddy.”

The really sad truth is these people would rather lose the election than nominate a true constitutional conservative and win the election. Their position and the direction of the republican party was spelled out clearly by the then RNC Chairman, Ed Gillespie in 2003.

This shift to embracing socialism and leftist republican leaders was underlined in red on the TIM RUSSERT, Meet the Press 9/7/03:
TIM RUSSERT - "Here’s the problem. Here’s the headline that greets people across the country. ‘Federal work force largest since 1990.’ Mr. Gillespie, you went up to New Hampshire and caused quite a stir. This is how the Manchester Union Leader, a conservative newspaper, described your visit:"Had there been any doubts about the direction the Republican Party is headed, they vanished last week when Republican National Committee Chairman Ed Gillespie visited New Hampshire. …No longer does the Republican Party stand for shrinking the federal government, for scaling back its encroachment into the lives of Americans, or for carrying the banner of federalism into the political battles of the day.’"

The result was a surprisingly frank admission that the Republican Party defines "fiscal responsibility" as increasing the federal budget at "a slower rate of growth" than the Democrats’, (Ed Gillespie’s words).

‘We asked him three times to explain why President Bush and the Republican Congress have increased discretionary non-defense spending at such an alarming rate, and why the party has embraced the expansion of the federal government’s roles in education, agriculture and Great Society-era entitlement programs."

"Those questions have been decided," he said. "The public wants an expanded federal role in those areas, and the Republican Party at the highest levels has decided to give the public what it wants." ’ "

The colors of both the Democrat and Republican Parties have merged into one single color. There is no difference, only the rate of speed to abject socialism and big brother government. In the words of Pat Buchanan, "They are but 2 wings on the same bird of prey."

These people who control the national republican party and many of the state parties have turned their backs on any chance for a return to federalism, a Constitutionally limited role for government, and the support of capitalism. The ideas of the Founders are viewed as archaic, the Founders were just "old, dead white men", and the Constitution is a living document that can be adjusted with the direction the wind blows.

I know of a lot of people who have had their fill of the Republican Party - National and State. Texas is no exception as the State Republican Party treated Ron Paul, his supporters, and his delegates like dirt. People don’t forget.

Oh, the Republican Party would like to capture their votes, but these supporters are viewed much like the girl from across the tracks. The neo-cons want to take her to bed, but don’t want to be seen with her in public places.

I believe the elites view Rand Paul as the Judas goat who can deliver the Ron paul supporters, but is very much "their boy" as demonstarted by him so willingly throwing his father under the bus.

There are a lot of conservatives who stayed at home because the Republican Party leadership have managed the process much like the magician who offers a deck of cards and says, "Pick a card. Any card." But, the card revealed is always the one he has already chosen for you because he has control of the deck.

And, the likelihood of them changing to support a true constitutionally defined central government, or stepping aside is more remote than a Southern Baptist kissing the Pope’s ring.

The neo-cons are really not true conservatives. At least not if the definition of conservatism is supporting the Rule of Law, the Rights and Liberties of the Individual, and a belief that ". . . to secure these Rights governments are instituted among men, deriving their just Powers from the consent of the governed. . . ."

I don’t believe he would recognize the Republican Party today.

I know I and many of my friends across the country did not vote for Mitt Romney, nor did we vote for John McCain. These neo-cons are killing our country just as surely as Barrack Obama and the Democrats are. The death by the neo-con Republicans is only a slower death, but the result is the same. I won’t participate in this fate they have chosen for my country regardless of whose hand is holding the knife.

As far as Rand Paul goes, , , any man who would turn his back on his own father and endorse his father’s opponent is undeserving of my support and a snake that bears watching. I don’t care how you might want to spin it, , , the correct word is, "betrayal."

How could anyone ever trust him?

Russia - Covid Does Not Exist As A Virus!

Scientists Worry Next Flu Season Will Be a Disaster

Biden 'Confesses' - There Was No Insurrection!

NOT OVER! They're Plotting More...

NASA is Now Advocating for Communism

Hey Bluetooth, What's New? : Oh, We Want to Chip You

"Yes, My Concerns Are That the Government Is Not Being Transparent about Those Risks"