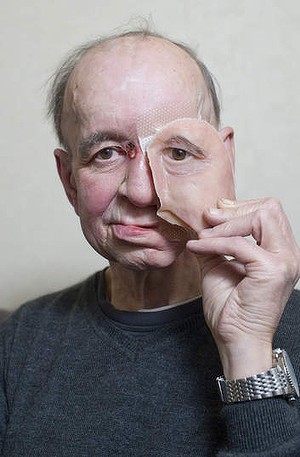 As he started to make plans for his wedding to Karen Hunger four years ago, doctors discovered an aggressive tumour the size of a tennis ball growing beneath the skin of his face.

Emergency surgery to deal with the cancer removed almost the entire left side of his face, including his eye, his cheek bone and most of his jaw, leaving a gaping hole where his features had once been.
Now, after years of having people stare and recoil at his disfigurement, surgeons have employed cutting edge three-dimensional printing technology to create a prosthetic face for Mr Moger, 60, in what is thought to be the first procedure of its kind in Britain.
By making scans of what was left of his skull and using computers to recreate what his face would look like, they were able to use a new type of printer that builds up layer upon layer of nylon plastic to produce the components they would need.

Fired For Refusing COVID-19 Vaccine? You May Not Receive Unemployment Benefits