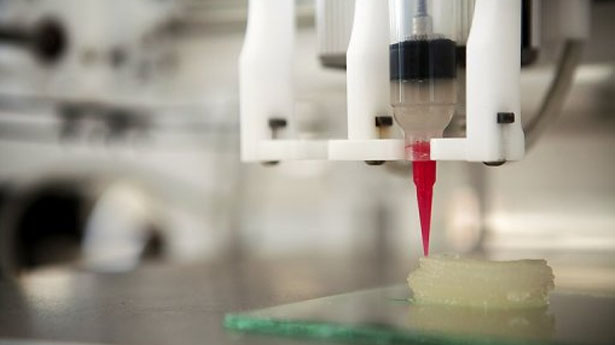 British scientists have used a custom-made 3D printer to make living tissue-like material that could one day serve medical purposes, according to findings released Thursday.

The material is made up of thousands of connected water droplets, encapsulated within lipid films, that can carry out some of the functions of human cells.

These “droplet networks” could be the building blocks of a new technology used to pass on drugs and, down the road, could even replace damaged tissue, said a statement from Oxford University, where the scientists are based. Their findings were published in Friday’s issue of the US journal Science.

Since the so-called droplet networks are completely synthetic, don’t have a genome and and don’t replicate, they lack the problems linked with other methods of creating artificial tissues — such as those using stem cells.

“We aren’t trying to make materials that faithfully resemble tissues but rather structures that can carry out the functions of tissues,” Hagan Bayley, a professor at Oxford’s Chemistry Department who headed the research, said in a statement.