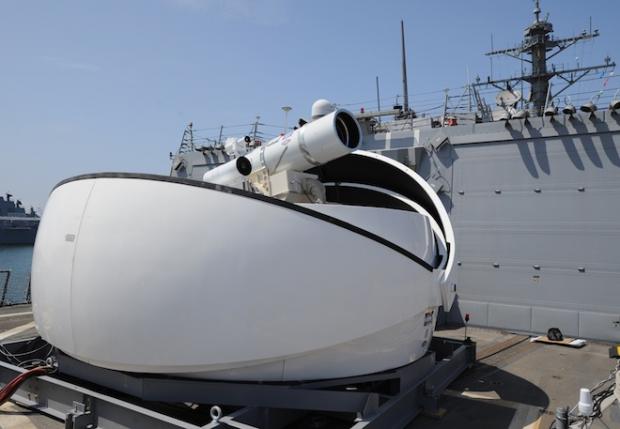 The video above is what the Navy’s top officers view as the future of their dominance on the surface of the world’s waterways. A laser cannon, its magazine limited only by the amount of energy pumped into it and costing pocket change to fire, punching through an adversary’s cheap anti-ship weapons — at the speed of light.

Long in testing and even older in ambition, the chief of naval operations, Adm. Jonathan Greenert, triumphantly heralded the dawn age of the shipboard laser gun during the Navy’s annual conference outside Washington. In tests aboard the destroyer USS Dewey last summer off the California coast, the Laser Weapon System successfully shot down surveillance drones and fast boats in its first round of sea trials aboard a surface combatant, according to Rear Adm. Thomas Eccles, one of the Navy’s top engineers. (Three of the shoot-downs were aboard the Dewey, while nine others happened on shore, Eccles clarifies.)

“This system,” Greenert told the naval community at the Sea Air Space conference, showing the above video to a hushed crowd, “it works.”