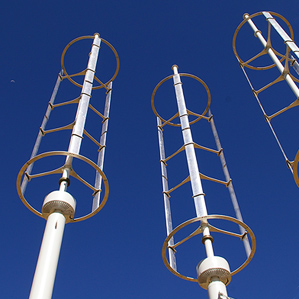 The remote Alaskan village of Igiugig—home to about 50 people—will be the first to demonstrate a new approach to wind power that could boost power output and, its inventors say, just might make it more affordable.

For decades, the trend across the wind industry has been to make wind turbines larger and larger—because it has improved efficiency and helped lower costs.

John Dabiri, a professor of aeronautical and bioengineering at Caltech, has a heretical idea. He thinks the way to lower the cost of wind power is to use small vertical-axis wind turbines, while using computer models to optimize their arrangement in a wind farm so that each turbine boosts the power output of its neighbors.

Dabiri has demonstrated the basic idea at a 24-turbine test plot in southern California. Grants totaling $6 million from the Gordon and Betty Moore Foundation and the U.S. Department of Defense will allow him to see if the approach can lower wind power costs in Igiugig. The first 10 turbines will be installed this year, and the goal is to eventually install 50 to 70 turbines, which would produce roughly as much power as the diesel generators the village uses now. Dabiri is also installing turbines at an existing wind farm in Palm Springs, California, using his models to generate power by putting up new turbines between existing ones.