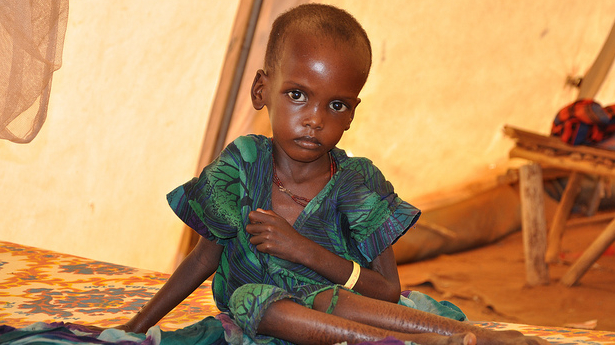 Millions of people could become destitute in Africa and Asia as staple foods more than double in price by 2050 as a result of extreme temperatures, floods and droughts that will transform the way the world farms.

As food experts gather at two major conferences to discuss how to feed the nine billion people expected to be alive in 2050, leading scientists have told the Observer that food insecurity risks turning parts of Africa into permanent disaster areas. Rising temperatures will also have a drastic effect on access to basic foodstuffs, with potentially dire consequences for the poor.

Frank Rijsberman, head of the world’s 15 international CGIAR crop research centres, which study food insecurity, said: “Food production will have to rise 60% by 2050 just to keep pace with expected global population increase and changing demand. Climate change comes on top of that. The annual production gains we have come to expect … will be taken away by climate change. We are not so worried about the total amount of food produced so much as the vulnerability of the one billion people who are without food already and who will be hit hardest by climate change. They have no capacity to adapt.”

America’s agricultural economy is set to undergo dramatic changes over the next three decades, as warmer temperatures devastate crops, according to a US government report. The draft US National Climate Assessment report predicts that a gradually warming climate and unpredictable severe weather, such as the drought that last year spread across two-thirds of the continental United States, will have serious consequences for farmers.

What a recovery! Hottest ever year causes… coral reefs to grow

3 Radical Government Programs and What They Mean for You Today

To Stop Climate Change Americans Must Cut Energy Use by 90 Percent, Live in 640 Square Feet...

Patreon Is Bankrolling Climate Change Deniers While We All Burn