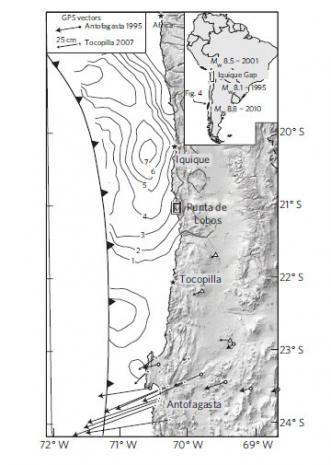 Earthquakes can permanently crack the Earth, an investigation of quakes that have rocked Chile over the past million years suggests.

Although earthquakes can wreak havoc on the planet's surface, more than a century of research has suggested the Earth actually mostly rebounds after quakes, with blocks of the world's crust elastically springing back, over the course of months to decades, to the way they initially were. Such rebounding was first seen after investigations of the devastating 1906 San Francisco temblor thathelped lead to the destruction of more than 80 percent of the city. The rebound is well-documented nowadays by satellite-based GPS systems

However, structural geologist Richard Allmendinger of Cornell University and his colleagues now find major earthquakes of magnitude 7 or greater apparently caused the crust in northern Chile to crack permanently. [The 10 Biggest Earthquakes in History]

"My graduate students and I originally went to northern Chile to study other features," Allmendinger said. "While we were there, our Chilean colleague, Professor Gabriel González of the Universidad Católica del Norte, took us to a region where these cracks were particularly well-exposed."

"I still remember feeling blown away — never seen anything like them in my 40 years as a geologist — and also perplexed," Allmendinger told OurAmazingPlanet. "What were these features and how did they form? Scientists hate leaving things like this unexplained, so it kept bouncing around in my mind."