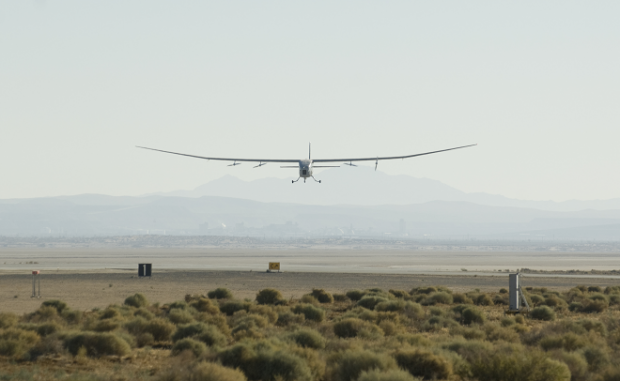 The Pentagon spent millions developing a humongous hydrogen-fueled drone that, it hoped, could fly at soaring altitudes for a week at a time. Now the drone is all on its lonesome, because no one wants to buy it.

Built by drone manufacturer AeroVironment, the Global Observer is a 70-foot-long jumbo drone with a wingspan nearly as long as one of the Air Force’s B-52 bombers. Powered by liquid-hydrogen fuel cells, it was billed as a persistent eye-in-the-sky capable of loitering at 65,000 feet for a week a time without spewing carbon dioxide into the atmosphere. The Pentagon also envisioned many missions. The drone’s 380-pound payload of spy cameras and sensors could stare at a diameter of 600 miles of earth at once, while doubling as a communications relay. It could patrol the oceans and possibly track hurricanes — the Department of Homeland Security was interested in it too.

But now no one wants the giant drone. “Currently, no service or defense agency has advocated for it to be a program,” Pentagon spokeswoman Maureen Schumann told InsideDefense (subscription only) in April. This was after spending $27.9 million developing the drone since 2007, which came to an end in December when the Pentagon closed down its development contract, the trade journal reports.

When emailed by Danger Room, the Pentagon didn’t elaborate on the reasons why. “Global Observer was a technology demonstration, not a program,” spokesperson Maureen Schumann wrote. But the Global Observer had run into danger before.

The first prototype, the GO-1, was destroyed in a crash during a test flight — its ninth test — at Edwards Air Force Base in April 2011. (The cause hasn’t been revealed.) The Pentagon had also ordered a second prototype called the GO-2 before the first prototype’s crash, but then renegotiated with the company to buy back the drone before it was completed. It also had a litany of now-former sponsors: the Army, Air Force, Coast Guard and U.S. Special Operations Command — and the Department of Homeland Security, U.S. Strategic Command and the Defense Threat Reduction Agency

General Milley, Why Aren't You Calling Out Communist Extremism In Our Military?