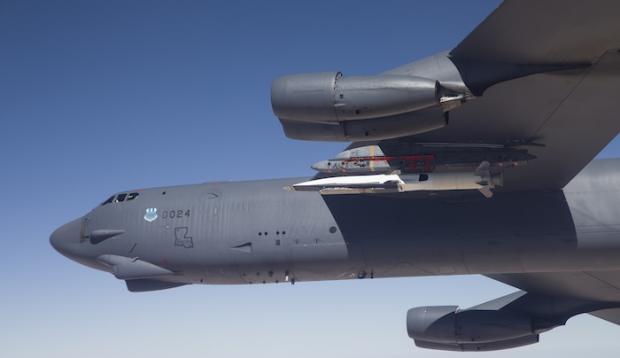 The U.S. military launched an experimental hypersonic aircraft on its swan song test flight Wednesday (May 1), accelerating the craft to more than five times the speed of sound in the longest-ever mission for a vehicle of its kind.

The Air Force's X-51A Waverider reached a top speed of Mach 5.1 during the test flight, traveling more than 230 nautical miles in just over six minutes before crashing into the Pacific Ocean off the California coast as planned, Air Force officials announced today (May 3).

Wednesday's flight used the last of four X-51A vehicles built by Boeing for the Air Force experiments. While the previous test, in August 2012, was a failure, Wednesday's mission pulled off the longest air-breathing hypersonic flight ever, officials said. [See Video of the X-51A's Final Flight]

The X-51A took off Wednesday morning from Edwards Air Force Base in California under the wing of a B-52H Stratofortress. The Waverider was released at an altitude of approximately 50,000 feet (15,000 meters) and used a solid rocket booster to accelerate to Mach 4.8 in just 26 seconds.