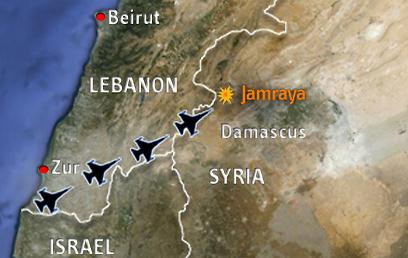 Israel’s airstrike on Syria was timed to precede an Al-Qaeda-led rebel offensive against President Bashar Al-Assad’s forces according to Egyptian and Jordanian intelligence sources, underscoring once again how jihadists are doing the dirty work of the very powers they claim to oppose.

Although the Syrian rebels were not given advance knowledge of the Israeli attack, they were specifically told when to launch new offensives in order to take advantage of the airstrike, which according to reports killed at least 100 Syrian Army troops.

In the weeks preceding the airstrike, the Syrian Army had scored notable victories against FSA rebels, taking back central areas of Homs just days before the attack. But the Israeli offensive greased the skids for militants to use, “access roads to advance toward Damascus,” where they launched, “heavy clashes with Syrian military forces throughout the country,” including in “northeast Rankous in Damascus; Daraya city in the Damascus countryside; and also in the villages of Homs, al-Alqamieh, Tunaibeh and Menneg in the Aleppo countryside.”

1 Comments in Response to Source: Israeli Airstrike on Syria Coordinated With Al-Qaeda Militants

STRAPPED INTO A SINKING HELICOPTER (with U.S. Marines) - Smarter Every Day 201

UNVACCINATED SOLDIERS WILL BE FIRED --

Can Mass Subjugation Save American Democracy?