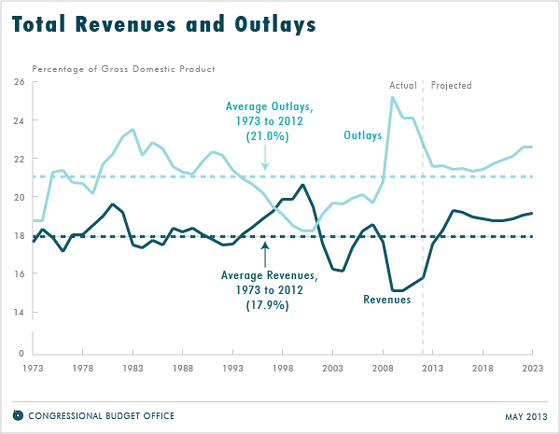 The Obama administration is looking for any good news as their culture of scandals unravels. What better economic development than a reduction in deficit finances for a breath of fiscal cheer. The essential questions that persist about a stalled economy and a suffering middle class still are unanswered. In addition, the premise that raising taxes, especially on the besieged tax payer, is a productive method to close the gap on public spending, is simply more of the same flawed policy that contributes to the increase in the national poverty level.

When the Congressional Budget Office issues their Updated Budget Projections: Fiscal Years 2013 to 2023, the assumption that spending will not increase is about as plausible as a dramatic reduction in food stamps is probable.

"If the current laws that govern federal taxes and spending do not change, the budget deficit will shrink this year to $642 billion, CBO estimates, the smallest shortfall since 2008. Relative to the size of the economy, the deficit this year—at 4.0 percent of gross domestic product (GDP)—will be less than half as large as the shortfall in 2009, which was 10.1 percent of GDP.

Because revenues, under current law, are projected to rise more rapidly than spending in the next two years, deficits in CBO’s baseline projections continue to shrink, falling to 2.1 percent of GDP by 2015. However, budget shortfalls are projected to increase later in the coming decade, reaching 3.5 percent of GDP in 2023, because of the pressures of an aging population, rising health care costs, an expansion of federal subsidies for health insurance, and growing interest payments on federal debt. By comparison, the deficit averaged 3.1 percent of GDP over the past 40 years and 2.4 percent in the 40 years before fiscal year 2008, when the most recent recession began. During the next 10 years, both revenues and outlays are projected to be above their 40-year averages as a percentage of GDP."

To the extent that borrowing less is real, not everyone believes it is desirable. From the Christian Science Monitor, Federal deficit falling fast: Is that a good thing ... or a bad thing?

"The federal government is on track to spend $82 billion less this year than last year, while pulling $363 billion more in tax revenue out of consumer wallets.

"The [deficit] is coming down too fast given the still weak economy," says Jared Bernstein, an economist and former Obama administration adviser, in his blog."

Pray tell, the Keynesians are coming back out of the closet once again now that sequester-related spending cuts start going into effect. When will big government proponents celebrate the first positive reduction in the growth of federal spending?

The quest for a "grand bargain" on a total revamping of the federal tax code that rejects the failed record of social engineering and corporate welfare would be the most productive development in monetary sanity since the FDR era.

As starved as the taxpayer is for a semblance of optimism in the financial health of the economy, the money-spinning drag coming out of a federal government godfather, is a fundamental reason why private enterprise is unwilling to take the risk of business expansion. As long as the consumer is unemployed or fearful of losing their part time job, how is it possible to ramp up the productive side of the equation, when higher taxes are expected from Obamacare?

The wild card that will scuttle any relief from a reduced deficit squarely comes from the inevitable rise in interest rates. The CBO attempts to provide an answer in the analysis, How Different Future Interest Rates Would Affect Budget Deficits. Now get ready to increase your dosage of hypertension medicine.

"Not only was inflation higher in the 1980s and 1990s than is currently projected for the next decade, real interest rates (nominal rates adjusted for inflation) were also higher during those periods than in CBO’s baseline projections for the coming decade. If real interest rates over the next decade ended up matching those historical values, it might be because the economy (and thus demand for credit) was stronger than in CBO’s projections. In that case, revenues would be greater than the amounts projected in the baseline, offsetting some of the increase in interest costs."

What kind of distorted world do the bureaucratic inbreeds populate? Any consumer who visits a supermarket knows all too well that inflation is dramatically higher than that reported in government projections. Nevertheless, assuming CBO estimates, the Wall Street Journal in, If Rates Rise, Larger Deficit Follows, offers a fateful warning.

Or, in a slightly different scenario, if interest rates rise as the highest 10 predictions of the private-sector economists surveyed by the Blue Chip Economic Indicators — that is, 4.5% on the 3-month Treasury and 5.8% on the 10-year in 2023 — then the federal deficit will be $157 billion bigger in that year then it would otherwise be, and $1.14 trillion bigger over ten years."

The WSJ conclusion: "But the point is clear: A government that borrows a lot will spend a lot more on interest when rates return to normal."

Even if you want to believe in the official projections, events have a way of going from bad to worse. La La Land has a talent of fostering "good government" for the political class. The rest of us are left to pay the interest on their deficit spending.