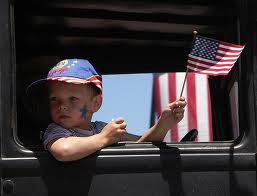 The first V-8 engined Chevrolet appeared in the striking art work of the 1955 Bel Air hard top coupe. Often two-toned, usually pastels, this car, stock from the dealer, had the acceleration to match the souped up flathead V-8 Ford engines that were ensconced in the hot rods of the day.

The small block V-8 found its way into the Corvette, saving the Corvette from extinction.

Ford came out with its new overhead valve V-8, installed in the 1955 Thunderbird, still a show-stopper today. The Thunderbird existed as a two-seater for 3 years. The 1955 and 1956 Ford Fairlane hard top coup looked like it was doing sixty sitting still.

The dramatic styling and energetic engines appeared everywhere in Detroit’s lineup, in the Mercury, the Pontiac, Oldsmobile, the Buick Century. So many two-tones, acceleration times cut in half. Life was good.

Witold Pilecki: The Inspiring Story of the Polish Spy Who Led a Resistance Against the Nazis

US plans to require COVID-19 shots for foreign travelers

Things That Keep Dr. Fraudci Up At Night: It's Complicated!

Retail Stock Buying In July Blew Away All Records, 50% Higher Than Previous All Time High

Peter Schiff: Central Banks Have Created The Mother Of All Bubbles