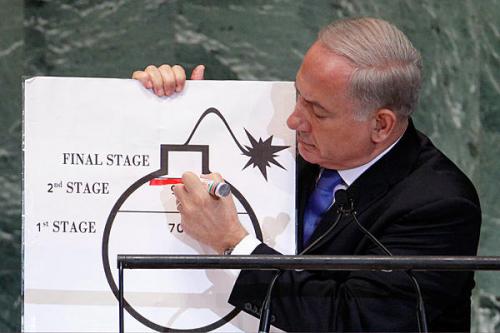 In 2014, it was the Ukraine’s turn, and after a prolonged campaign orchestrated by Victoria Nuland and the US State Department (again) which succeeded in the now traditional violent coup (see Egypt and Libya), once again saw Putin victorious, after yesterday’s annexation of the all important Crimean peninsula, achieved without the firing of one shot.
So now that Putin has succeeded in trouncing the US twice in a row, it is time to poke some old, well-known geopolitical wounds, such as Iran. And who better to do it than Israel, where as Haaretz reports, “Prime Minister Benjamin Netanyahu and Defense Minister Moshe Ya’alon have ordered the army to continue preparing for a possible military strike on Iran’s nuclear facilities at a cost of at least 10 billion shekels ($2.89 billion) this year, despite the talks between Iran and the West, according to recent statements by senior military officers.”

WATCH OUT FOR FALSE-FLAG EVENTS, From Mar. 19th through May 1st. The International Central Bankers need a war, to cover up the global economic collapse.

WHO, exactly, is behind it all? Watch the following, CAREFULLY.

Take Ha'aretz with a HUGE grain of salt.  Over the years it has evolved into an overly leftist mouthpiece, not just in editorial stance but in reportage.  It is analogous to Great Britain's Guardian newspaper.

The report cites "senior military officials" and three unnamed Knesset MKs as stating that the huge sum - the same as in 2013 - has been relegated within the IDF treasury for preparations for an attack on the Islamic Republic in 2014.

The report also interprets statements from IDF representatives and "government officials from the political echelon" as the IDF receiving direct orders from Netanyahu and Ya'alon over the issue.

The Prime Minister's Office (PMO) and IDF Spokesperson's Office both declined to comment.

While Ya'alon was adamant about the US taking the lead in attacks against Iran in the previous Knesset term, and took up the issue with then-Defense Minister Ehud Barak, he recently criticized the US and the West for remaining complacent about the outcome of ongoing talks.

"Everyone knows Iran is lying," Ya'alon noted. "But the pampered West is satisfied with postponing conflict [with Iran over the nuclear program]." He added that it may be possible to stall Iran "until next year - or even after this term - but eventually, it will explode."

Under a six-month interim deal which was reached in November and went into effect in January, Iran agreed to freeze its uranium enrichment program in return for sanctions relief worth some $6-7 billion, including the transfer of some $4.2 billion in frozen overseas funds.

That interim agreement is meant to lead to a final accord that minimizes any potential Iranian nuclear weapons threat in return for a full lifting of sanctions.

Ya'alon's skepticism has continued as world powers, including the United States, gathered in Vienna to try and hammer out the details of a final agreement with Iran this week. Iran recently downplayed its acceptance of such a deal, however, leaving US congressmen scrambling to enact more sanctions against the regime.

Some US officials are warming to the possibility of a military conflict, despite talks. Lieutenant General (ret.) William G. "Jerry" Boykin, former U.S. Deputy Under Secretary of Defense, warned earlier this month that the interim agreement is a "farce" and encouraged the US to take military action.

​In the meantime, however, talks continue - and EU and Iranian officials both claimed the Vienna meetings have seen some successes.

"We had substantive and useful discussions covering a set of issues including (uranium) enrichment, the Arak reactor, civil nuclear cooperation and sanctions," the EU's Catherine Ashton stated Wednesday, according to the Daily Star.

​Iranian Foreign Minister Javad Zarif added, "there are signs that an understanding is possible that respects the rights of the Iranian nation."

Israeli lab: Some existing drugs could stop COVID at almost 100%