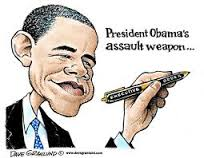 The official was responding to a journalist's questions about the President's reaction to news of a shooting that occurred at an Oregon high school. Two people were killed, including the shooter.

While the President is looking for ways to implement his gun control agenda unilaterally, Earnest stressed that the Administration would also like to see legislative action to increase gun control.

"The President's goal is to look for opportunities to act administratively, unilaterally using his executive authority to try to make our communities safer," Earnest said. "We're always looking for those opportunities. But none of those opportunities when they present themselves is going to be an acceptable substitute for robust legislative action."

Possibly the MOST important thing to remember about new laws and new "Executive Order" laws is, laws do ONLY TWO things. They, themselves, DON'T actually make anything happen. They don't confer any rights , and they don't remove any rights. Rights are inherent. Here's the 2 things laws do.

2. Laws make certain people feel that they MUST obey the laws. The reasons for obeying might be anything from false guilt if they don't obey, to fear of the law enforcement people mentioned in #1, above.

That's it. That's all that laws do. All they do is to group people into two, basic categories, like "divide and conquer." There are all kinds of results that come about from the laws, but the above 2 categories of people are the only ones affected directly by new laws.

If the people in category #1 don't change and become adverse to both their job, as well as, the making of new laws, then they are basically criminals and pirates, out to steal from anybody.

If the people in category #2 don't change and stand up for their rights by resisting new laws, then they are sheep, and deserve the fleecing that they get.

One of our greatest jobs if we want to live in peace is to convince as many people around us about the laws. It probably won't be hard to do with average friends and neighbors (who are NOT in law enforcement). They have probably been thinking these thoughts already. They simply aren't deep enough thinkers to state it clearly in their own minds like #1 and #2 above. State it clearly to them. If they object, ask them which laws make anyone do anything. Ask them which of the traffic laws force anyone to go the speed limit. After all, isn't it only people who are in category #2 who obey the traffic laws?