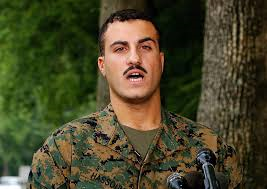 Cpl. Wassef Ali Hassoun, 34, turned himself in and was being flown Sunday from an undisclosed location in the Middle East to Norfolk, Va. He is to be moved Monday to Camp Lejeune in North Carolina, according to a spokesman, Capt. Eric Flanagan.

Maj. Gen. Raymond Fox, commander of the 2nd Marine Expeditionary Force at Lejeune, will determine whether to court martial Hassoun.

In a written statement from its headquarters at the Pentagon, the Marine Corps said the Naval Criminal Investigative Service "worked with" Hassoun to turn himself in and return to the U.S. to face charges.

Hassoun disappeared from his unit in Iraq's western desert in June 2004. The following month he turned up unharmed in Beirut, Lebanon and blamed his disappearance on Islamic extremist kidnappers. He was returned to Lejeune and was about to face the military equivalent of a grand jury hearing when he disappeared again.