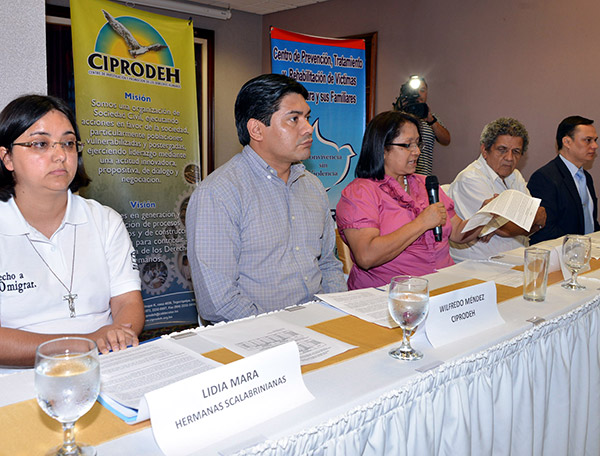 (ed note - this is a translation via Bing/microsofttranslator.com)

Authorities of several civil society organizations yesterday questioned the lack of a nation the Government plan to prevent thousands of Honduran children to continue migrating to the United States.

Civil society organisations said they had reports of systematic violations against minors.

At the discretion of those entities, the growing number of Honduran migrants to the United States and Mexico, accounts for 80 percent of migration in Central America and is projected that at the end of 2014 at least some 70 thousand children and adolescents will migrate to those countries of the North.

They consider that this situation has resulted in a humanitarian emergency, exceeding the capacities of protection from the State, which has not been able to provide livelihoods and security to the population.

In the same way they criticized United States and Mexico, because they fail to ensure the care of migrant people and does not give access to asylum to the deserving of international protection.

Also, they do not guarantee family reunification or the conditions for a return to decent and safe of migrants, with a human rights-based approach.

This was made known on Monday during a press conference given by the representatives of the Association for a better life of people affected with HIV/AIDS in Honduras (Apuvimeh), the center of prevention, treatment and rehabilitation of torture victim (CPTRT), the Centre of research and promotion of human rights (Ciprodeh) and institutions private Pro girls CoordinatorChildren, adolescents, young people and their human rights (Coiproden).

Why do people migrate from Central America to Mexico, and particularly, to the United States? Isn't it because they believe that they will have a better life here?

Why do they believe that they will have a better life here? Isn't it because of rights activist groups that have had success getting more rights for these migrants?

Note, however, that the rights groups are ONLY USING the word "rights." What they are getting for these people is benefits. And who pays for the benefits? Isn't it the American (and Mexican) people?

Now, there is nothing wrong with helping out folks who are moving to a new country for better living conditions. But don't steal my money through taxes so that I am forced to help migrants in ways that I don't believe in.

Does this attitude on my part seem cruel, and even unjust? It might be cruel and unjust except for one fact. The politicians behind the benefits programs for the migrants are lining their pockets with the tax dollars that they claim are going to the migrants. Only a small percentage of the funds are actually getting to the migrants.

On top of this, it is the rights activist groups that are causing this migration. How? by advertising throughout Central America, if only by word of mouth, that they will fight for benefits. Often those benefits don't materialize the way they should. Isn't it the politicians that are pushing the rights groups into doing what they are doing?

There's a whole lot behind this whole migrant movement other than simple migration.

'Do NOT come to the US': Biden's DHS Secretary warns Cubans and Haitians...