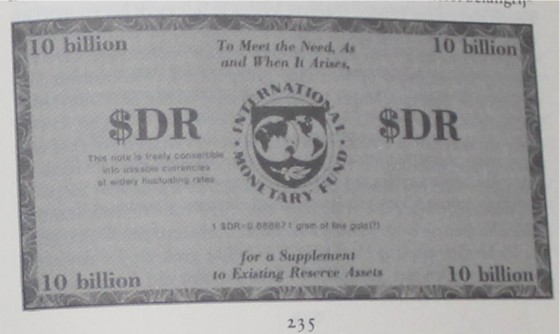 The global corporatist economy works differently from business transactions at your neighborhood convenience store. Ostensibly, the International Monetary Fund was set up to allow the G20 nations to umpire the ground rules to play nice in macro trade. Platitudes about promoting job growth or third world development are the realm of public relations for the central banks. The impact of the IMF on virtually all countries, vividly seen in every crisis whether real or contrived, always has a political objective that underpins the economic functions. As confidence in national currencies falter, the big sugar daddy loves to intervene, provided they pull the strings.

The use of SDRs is one tool used to paper over insolvency. Investopedia explains 'Special Drawing Rights - SDR' in the following manner.

"You can think of SDRs as an artificial currency used by the IMF and defined as a "basket of national currencies". The IMF uses SDRs for internal accounting purposes. SDRs are allocated by the IMF to its member countries and are backed by the full faith and credit of the member countries' governments."

From the International Monetary Fund press release: The IMF is Using SDRs to Bailout the Ukraine.

"The Executive Board of the International Monetary Fund (IMF) today approved a two-year Stand-By Arrangement (SBA) for Ukraine. The arrangement amounts to SDR 10.976 billion (about US$17.01 billion, 800 percent of quota) and was approved under the Fund's exceptional access policy. The authorities' economic program supported by the Fund aims to restore macroeconomic stability, strengthen economic governance and transparency, and launch sound and sustainable economic growth, while protecting the most vulnerable."

As this example illustrates the IMF interposes their lending schemes on non-G20 counties. While the proposed BRICS Development Bank offers a competing banking scheme, the reigns of global financial control are still in the hands of the BIS gang of banksters. As the Towards an expanded role section of The case for a real SDR currency board, points out; the magnified role of a substitute function for SDRs allows for reserve assets collateralization.

"A more significant reform would allow international commercial banks to hold official SDRs (open accounts in the SDR department) thus allowing foreign exchange market intervention in SDRs directly. The ability to settle market transactions with SDRs directly without first exchanging them for US dollar or euro would further enhance the attractiveness of official (allocated) SDRs as reserve assets. Such an SDR would take the form of current account balances with the issuer (the IMF or a third-party clearing bank such as the Bank for International Settlements (BIS). Account holders might be limited to IMF members as now or could be opened to all international banks. A two or three-tiered structure could be used to tie all banks into the system for the clearing and settlement of SDR payments."

The Bank for International Settlements on Big Banks describes an even more insidious method to use SDRs as "deposits of the central banks become claims on those currencies", thus diminishing even further stated goals and purposes for the IMF.

Complicating matters further, in a staff working paper ERSD-2012-10 from the WTO, cites the issue that "SDRs can only be used by governments and not by private entities in regular transactions". Elena Flor in an essay, The Debate about the SDR as a Global Reserve Currency and SDR Denominated Securities, proposes a further ploy to obscure an already convoluted currency arrangement.

"One can make the hypothesis that initially the IMF itself, some Governments and special international financial institutions such as the World Bank could issue SDR denominated securities, which could then be followed by banks and non-financial firms. In fact, in those markets where global imbalances emerged, there is the more impelling and greater need to have debt securities in a supra-sovereign reserve currency."

Containers Are Being Built At A Record Pace. It's Still Not Enough