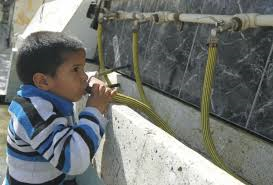 Israel's Gaza offensive, which by the sixth day has claimed at least 145 lives, including 28 children, and injured as many as 1,000 people, threatens to bring an even deeper humanitarian disaster to the area, with vital water and sewerage systems being destroyed by Israeli air strikes.

Palestinian officials on Saturday claimed that the Israelis had targeted water wells in different parts of Gaza City, leaving thousands of families without access to clean drinking water. An Oxfam official said going into the weekend that 90 percent of the water in Gaza was already unsafe to drink.

The sewerage system is also a target, with Israeli warplanes targeting sewage treatment stations in West Gaza City early on Saturday. The areas most affected are Shati refugee camp, Tal al-Hawa, Sheikh Ejleen and most Western districts, according to Saed al-Din Atbash, head of water facilities at Gaza Municipality.