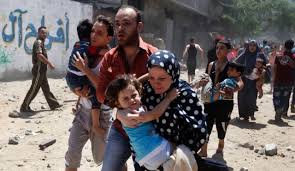 "On Thursday afternoon a building in the neighborhood was bombed. With a missile. All the air filled up with light, a sort of big ball of fire we only started seeing during this attack," a woman I will call T. related at noon on Friday. Like all Gazans, they didn't sleep at night and fell asleep only at around 8 A.M. Later on, A. said the target was presumably a Hamas institution located in the building, in Gaza City's Tel al-Hawa neighborhood, but the missile missed and killed Dr. Anas Rizaq Abu al-Kas, 33, in his clinic. He was one of 114 Palestinians killed by the Israel Defense Forces, as of Saturday morning, including 26 children and 18 women. (By Saturday night the death toll had already reached at least 151).

The physician's "father and mother were also killed, also in error, during Operation Pillar of Defense, in 2012," A. added.

T., in an uncharacteristically weak voice, continued. "At night we wait for day. In the day we wait for night. Waiting for our turn in the slaughterhouse. We heard just this morning how the entire Ghanam family, from Rafah, died. Another family that was killed," T. says.

1 Comments in Response to Gaza civilians waiting 'for the slaughterhouse'