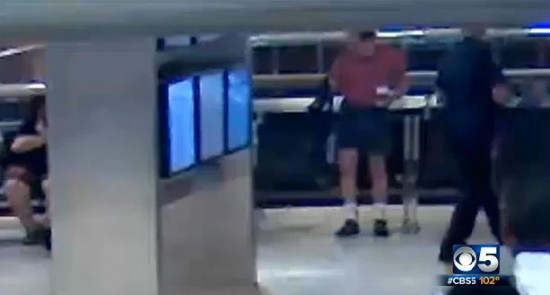 (UPDATE: No charges filed... check comment section below article)
The Barrow Neurological Institute has put its gun-toting brain scientist, Peter Steinmetz, on leave from his job.

Steinmetz made national headlines after he was arrested on Friday for mishandling a fully loaded AR-15 he'd brought with him to Phoenix Sky Harbor International Airport.

Apparently, the gun-rights advocate was just trying to make a point about the legality of bringing a gun to the airport. But the incident has led to problems with his job as director of the Barrow's Neuroengineering/Human Neurophysiology Laboratory.

As New Times reported on Tuesday, Barrow wiped Steinmetz from its website. On Wednesday, the esteemed institute revealed further action in a new statement:

"Following his arrest at Sky Harbor Airport and after careful analysis and review, Dr. Peter Steinmetz has been placed on administrative leave as a part-time scientist at St. Joseph's Barrow Neurological Institute. St. Joseph's and Barrow will cooperate with the authorities regarding his arrest and we will continue to take very seriously the charges that have been filed against him. Dr. Steinmetz is a part-time basic scientist who works in a research laboratory. He has never treated patients at Barrow or St. Joseph's.

"We are proud to be leader in this community and to be respected by the medical profession around the world. The trust that thousands of patients and their families put in us every day is paramount. We are committed to maintaining that trust and the loyalty of our patients, our doctors and our staff."

That's all the Barrow will say for now -- and as you can see there's no indication of when he might return to work.

Police arrested Steinmetz on suspicion of two counts of disorderly conduct with a weapon. The allegation is that the muzzle of his rifle briefly was pointed at two women at the airport, who later told police they were fearful of the gun. Steinmetz claimed he was just there to get a cup of coffee.

His Fcebook and Google Plus sites indicate he's interested in gun-rights advocacy, judging by several news stories he's shared and commentary he's posted about gun issues. For instance, in one post he worries that the 2013 Navy Yard shooting in Washington D.C. was "another case of a mass shooting in an area where all the victims are legally disarmed." He also wrote about sending a letter to U.S. Senator John McCain on April 10, 2013, to urge McCain to "oppose any attempt to debate or pass" a bill that would mandate "universal background checks."

Steinmetz published a short rant about the Transportation Security Administration on November 1, the day a TSA agent was shot and killed at the Los Angeles International Airport: "Why was this guy so angry? Perhaps the american people can wake up and realize that the TSA is routinely virtually strip-searching everyone while achieving absolutely nothing in terms of improved security... Time to get rid of the expensive and wasteful TSA!﻿"

I just talked to Marc J. Victor (www.AttorneyForFreedom.com) and he said that no charges have been filed ( but they have 7 years to do so ???). We have a scheduled 3 hour interview with Marc in his office Aug 13th 2014 on this case and others (also his two teenage sons will share their "Devil Pup" Marine Boot Camp experience at Camp Pendleton this month (Marc is a Marine that served during Gulf War I). This coming Monday there is to be a 3pm Press Conference at Sky Harbor International Airport about this case and the issue of Gun Rights at the Airport. Charges have NOT been filed and the hearings have been vacated.

Ernie was just talking about this with Terry Bressi on his radio show a couple of days ago. Daring the guys with guns to react is a courageous thing to do but fraught with personal peril. They just need to react once. You have to avoid dying, beatings, arrest eery time.

I remember when Chris B decided to wear his loaded AR-15 on a strap to greet Obama with us packing activists taking the event to a whole new level . . . we all would have been arrested had the PHX PD obeyed the commands of their federal Secret Service masters. They declined. And the PHX PD leadership was replaced within weeks by a SWAT sniper commander the SS felt comfortable with.

Clearly Dr. Steinmetz did not have his hands on the rifle but on the strap at the time it is alleged the barrel was pointing in the vicinity of two already distraught women. Whether the incident indeed actually happened will be there word against his unless there is video---therein lies one mistake on the part of the good doctor, working alone. His second one would be allegedly touching the strap while manipulating his coffee. Chris B made sure the rifle barrel was pointed down at all times. He never once switched the gun between shoulders despite being outside for hours. He never gave them a chance to claim anything. He had plenty of witnesses and video.