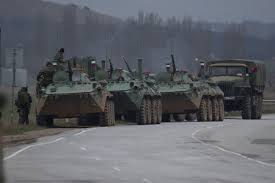 Following scrutiny surrounding the Ferguson uprising earlier this month, several local law enforcement agencies have stated that they wish to return military gear which they feel was somewhat forced onto them by The Department of Defense.

That has turned out to be easier said than done however, as the counties in which the sheriff's offices and police departments are based are being asked to absorb the cost of transporting huge armored vehicles.

The details are revealed in a report by The Washington Times, which found "a number of departments complaining about the heavy armored vehicles that have been transferred, finding them to be overkill for the jobs local law enforcement needs to do."

For example, the sheriff's department in Chelan County, near Seattle, was forced to take three armored, tracked vehicles at the insistence of the Pentagon, when it had only asked for one in 1999.

The ten ton trucks, which were designed to carry 107 millimeter mortars, are still owned by The Pentagon. However, the military is less than keen to take them back.