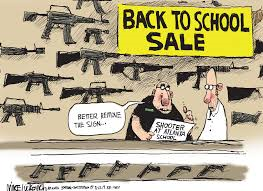 A 23-year-old teacher at a Cambridge, Md. middle school has been placed on leave and ? in the words of a local news report ? "taken in for an emergency medical evaluation" ? for publishing, under a pseudonym, a novel about a school shooting. The novelist, Patrick McLaw, an 8th-grade language arts teacher at the Mace's Lane Middle School, was placed on leave by the Dorchester County Board of Education, and is being investigated by the Dorchester County Sheriff's Office, according to news reports from Maryland's Eastern Shore. The novel, by the way, is set 900 years in the future.

Here is part of a breathless, law enforcement-friendly report from WBOC, which describes itself as "Delmarva's News Leader":

Early last week the school board was alerted that one of its eighth grade language arts teachers at Mace's Lane Middle School had several aliases.  Police said that under those names, he wrote two fictional books about the largest school shooting in the country's history set in the future.  Now, Patrick McLaw is placed on leave.