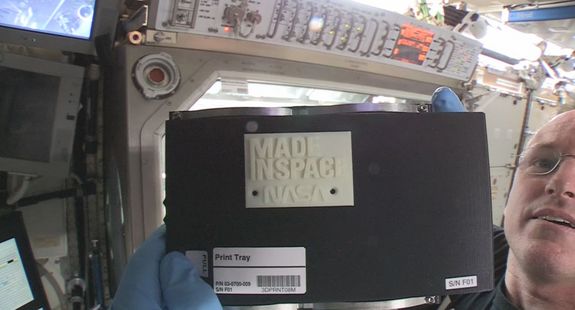 The 3D printer, which was designed and built by California-based startup Made In Space, created an extruder plate — a piece of itself — on Monday (Nov. 24), wrapping up the hour-long task at 4:28 p.m. EST (2128 GMT). The milestone marks a key step toward a future in which voyaging spaceships print out their own spare parts on the go and colonists on other worlds make what they need from the dirt beneath their boots, advocates say.

"This is the first object truly manufactured off of planet Earth," Made In Space CEO Aaron Kemmer told Space.com. "It's a huge milestone, not only for Made In Space and NASA, but for humanity as a whole." [3D Printing: 10 Ways It Could Transform Space Travel]

The extruder plate, which measures roughly 3 inches long by 1.5 inches wide by 0.25 inches thick (7.6 by 3.8 by 0.6 centimeters), features the logos of both Made In Space and NASA, Kemmer said. Choosing the plate, which holds in the printer's electronic board and wiring, for the first build has symbolic significance, he added.

"We thought a lot about how we could demonstrate the historical shift here," Kemmer said. "It represents the idea that if something goes wrong on the space station, or future space stations, the crew and NASA now have the ability to build a solution."

Peter Schiff: Gold Is Your Only Alternative