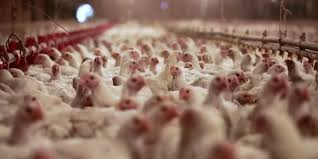 Watts went into chicken farming because, where he lives, there were not many alternatives. His parents and relatives had been row-crop farmers, but after the tobacco economy began to collapse, that looked like not a great way to make a living. Out of college, he began working as a field technician for an agricultural-chemicals company, but he disliked cubicle life and wanted to get back outside. When an advance man for Perdue came calling, showing spreadsheets of how lucrative chicken farming might be, he decided to give it a try.

It worked for him at first; he said that he was, intermittently, a top earner in the slaughterhouse complex that buys his chickens. But over the years, he chafed at the economic conditions the vertically integrated business imposed on farmers, who always seemed to get the raw end of the deal, and he grew increasingly uncomfortable with what intensive farming did to the chickens themselves. He began speaking out: first writing op-eds, then testifying at a government hearing exploring unfair contract conditions, and then talking to advocates and journalists.

And now he has taken his boldest step yet — really an extraordinary one, given the closed-door nature of most corporate farming: He has made a video, in cooperation with the animal-welfare group Compassion in World Farming, in which he escorts cameras into his broiler barns.