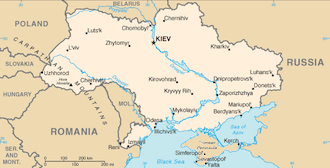 The Ukrainian parliament today formally renounced their non-aligned status, with MPs saying the goal is to eventually join NATO. With a long border with Russia, this is naturally upsetting the Russian government.

Neutrality was the law of the land in Ukraine from its emergence from the Soviet breakup, though internally they have shifted politically between pro-Russia and pro-US governments.

The most recent political shift, a protester-imposed regime change, has them back on the pro-US side, and pushing for NATO membership. Though the US has been backing this membership, NATO is unlikely to admit Ukraine with unresolved territory disputes with Russia.

This has been common among a few would-be NATO members recently, notably Ukraine and Georgia, who have both sought membership but claim sovereignty over territory they don't control, which would oblige NATO, if they were members, to immediately launch a war on their behalf.