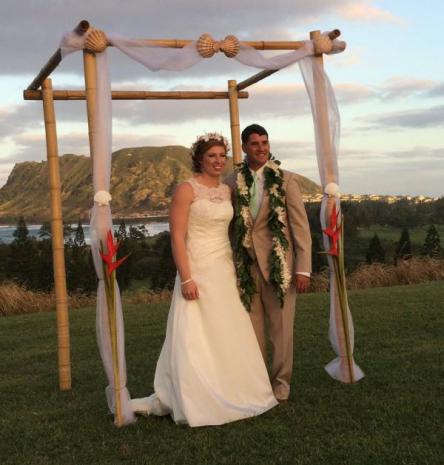 The first, a nicely worded regretful but congratulatory RSVP to their wedding invite... and the second, as Bloomberg reports, informing them that their wedding would have to be moved since President Obama wanted to play through.

Stationed in Hawaii and knowing the president spends his Christmas holiday on the islands, they invited [President Obama] to their ceremony on a lark. They had received a letter earlier on Saturday saying Obama regretted he couldn't come and wishing them happiness on their wedding day.

"It was kind of ironic they got the letter from them and then, within hours, they were told they had to be moved due to him," Jamie McCarthy, Mallue's sister, said in an interview. "It was emotional, especially for her—she's the bride and in less than 24 hours they had to change everything they had planned."

The golf course, located on the Marine Corps Base Hawaii, is a regular stop for Obama when he's in the state, with the Ko'olau Mountains framing the front nine and majestic views of Pacific coastline spanning the back nine. It's also a favorite spot for Mallue, a golfing enthusiast.

Still, anyone planning an event at the course when the president may be in town is warned about the potential for last-minute shuffling, said Naile Brennan, manager of K Bay Catering, which was handling logistics for the wedding.

Bitcoin Tumbles After Amazon Denies It Will Accept Crypto This Year