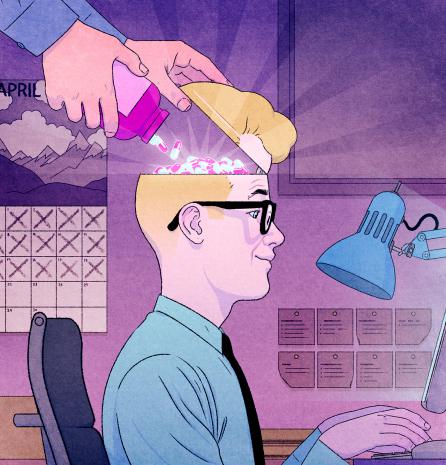 Andrew started his college graduation day at 6 a.m. with a wakefulness agent called modafinil, sometimes known as Provigil—it was the first time he remembers nootropic brain drugs having such a startling effect. He was juggling family and celebrations along with two ceremonies, engineering in the morning and economics in the afternoon, with a band competition in between, which he won. For 22 waking hours he was happy, alert, firing on all cylinders, oblivious to any fatigue.

"At that point, it was like, 'Holy crap, this stuff can be very powerful,' " Andrew told the Observer.

Now that he's a corporate strategist working with health care companies on their mergers, Andrew, who requested we use a pseudonym, will sometimes call upon some chemical assistance for business trips requiring long flights, client meetings, back-to-back dinners and work hours back at the hotel. He doesn't want a pedal-to-the-metal amphetamine: He wants focus, creativity and clarity without the side effects or dependencies. When he began, he started by experimenting with little-known chemicals like piracetam, a cognition-booster, before adding other vitamins and herbs, carefully measuring out milligrams along the way. As his alertness and focus increased, he kept a Google Doc to share his results with friends.