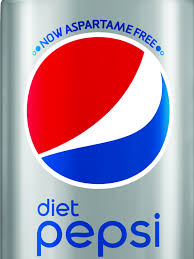 Big news has hit the press! PepsiCo announced on April 24th that it will no longer sell Diet Pepsi made with aspartame in the United States.

I think that this represents a significant win for U.S. consumers (despite the fact that Diet Pepsi products elsewhere in the world will continue to be formulated with aspartame).

This move comes after sales of Diet Pepsi dropped 5.2% in 2014. Diet Coke sales dropped 6.6% in the same year. The fall in diet soda sales started in 2005 and 2006, and has since increased in speed, dropping 20% since 2009. The decline is attributed to decreasing consumer interest in 'diet' products and soft drinks in general, which is a trend I've been very pleased to observe.

The new Diet Pepsi, sweetened with sucralose (commonly known as Splenda) and acesulfame-potassium is said to taste the same, but removes concerns about the safety of aspartame – because when you look into it, there are definitely some scary things about how aspartame is made.

"To Diet Pepsi consumers, removing aspartame is their No. 1 one concern," says Seth Kaufman, a senior vice president at PepsiCo. "We're listening to consumers. It's what they want."

Yerba Mate: The Ethical and Healthier Alternative to Coffee

Fermented Foods: How to 'Culture' Your Way to Optimal Health

My 7 Worst Gardening Mistakes and What I Learned From Them