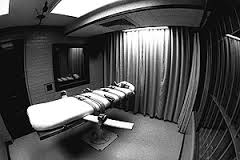 The prospect of death row inmates being "burned alive at the stake from inside" in the absence of effective anesthesia was invoked at the US supreme court on Wednesday as the justices wrestled with the nationwide crisis caused by the European-led boycott of lethal injection drugs.

Anger spilled from the nine justices from both sides of the court's ideological divide. The more conservative wing vented their disapproval at those they called "abolitionists" who they accused of trying to overturn the death penalty by stealth, while the more liberal judges attacked states such as Oklahoma for using a new drug protocol that had left prisoners "writhing in pain" in executions that took up to two hours to complete.

The fraught oral argument, the first hearing of its sort at the supreme court in seven years, encapsulated the highly charged nature of the debate around capital punishment in America today. It indicated that the ethical and legal conundrum induced by a boycott of medical drugs being sold to US corrections departments has now percolated right to the pinnacle of the country's judicial system.

In Glossip v Gross, the court is being asked to decide whether the use of a new drug in executions, midazolam, fell within the boundaries of the US constitution's ban on cruel and unusual punishment. A string of recent procedures have shown prisoners displaying visible signs of prolonged distress – most notoriously the execution of Clayton Lockett almost exactly one year ago, in which he thrashed and groaned on the gurney in full view of witnesses, taking 43 minutes to die.

Justice Elena Kagan, who normally sides with the unofficial group of four liberal judges on the nine-strong panel, put the issue confronting the court most vividly. She questioned whether the state of Oklahoma could give a solid guarantee that midazolam could produce and sustain such deep unconsciousness in a prisoner that he would feel no pain throughout the execution.

"There is huge uncertainty about what happens when somebody is given [midazolam]. The evidence is that nobody can tell – that nobody knows for sure whether midazolam will work," Kagan said.

Modern medicine is WEAKENING the immune system with chemicals, antibiotics...

Russell Brand: Why Are Drugmakers Who Caused Opioid Crisis in Charge of Solving the Pandemic?

In Peru, Ivermectin cut covid deaths by 75% in 6 weeks: cheap, safe and quite ignored