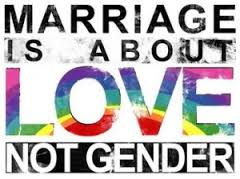 No single person or group of people can claim credit for today's historic US Supreme Court ruling declaring that same-sex couples have a constitutional right to marry. The decision is the hard-earned payoff for decades of work by millions of activists, politicians, public figures, and average Americans who have fought relentlessly for this right.

But in recent years, the giants of Silicon Valley have played an important role in amplifying the call. Leaders of the world's biggest tech companies coupled moral conviction in support of marriage equality with bottom-line financial arguments—arguments that only the country's most powerful business leaders were in a position to make.

Back in 2013, 278 companies, including Apple, Facebook, Google, Microsoft, and Amazon, filed a brief with the Supreme Court in support of overturning the Defense of Marriage Act, often referred to as DOMA.

In the filing, they argued that DOMA burdens businesses with keeping track of an inconsistent patchwork of federal and state legal definitions of marriage for the purpose of benefits, taxes, and other administrative issues.

"Confusion abounds, and even sophisticated employers struggle," the brief read.

Along with the HR nightmare, the companies also argued that DOMA was detrimental to morale and, in many cases, forces businesses to forsake their own beliefs. "In the modern workplace, the employer becomes the face of DOMA's discriminatory treatment, and is placed in the role of intrusive inquisitor, imputer of taxable income, and withholder of benefits," it reads.

"The employer is thus forced by DOMA to participate in the injury of its own workforce morale."

Tech leaders have, meanwhile, been outspoken on other instances of discrimination against the LGBT community.