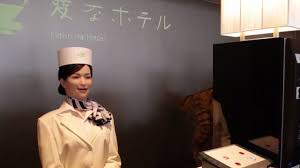 It was recently reported that the world's first robot hotel has opened in Japan, and it even features a dinosaur robot as a receptionist.

The Henn na Hotel in Japan, translated to "The Weird Hotel" in English, opened for its first visitors this week. The hotel is located near the Huis Ten Bosch amusement park in Sasebo, in southwestern Japan.

Hideo Sawada, president of the hotel company responsible for the innovation, has said that he made the move to cut back on prices.

"I wanted to highlight innovation. I also wanted to do something about hotel prices going up," he said.

Unfortunately though, he said that the robots cannot yet do everything that a human can do.

Some critics may argue that robots take away jobs from humans, but this traditional narrative has never actually been proven, it is merely an assumption that has become generally accepted. In the past, technology that has replaced working humans has not actually diminished the amount of jobs available for humans, it has merely pushed the industry and the workforce in a different direction. For example, plows, tractors and other farming equipment is responsible for the fact that there are fewer farmers today than there were hundreds of years ago, however, new jobs were created by that technology that people in the past would have never dreamed were possible. There will always be ways for humans to provide value for one another, even if robots are hired to complete all of the menial tasks that people can do, there will still be a need for goods and services, and there will still be a marketplace for humans to interact on that level.

Are Humans The Next To Be Hacked? The New "Arms Race" Actually Over A.I.