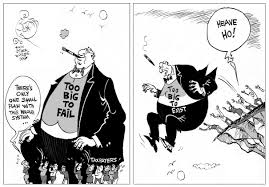 Big banks better start looking under the couch cushions. They need to come up with $1.2 trillion to fortify themselves from the next financial meltdown.

Global financial regulators Monday issued new rules that are designed to prevent a failing big bank from dragging down the entire financial system. That's what happened in 2008 when Lehman Brothers imploded, sparking the worst financial crisis since the Great Depression.

The rules call for the 30 biggest banks in the world to boost their capital cushions, the loss-absorbing cash they have to set aside for financial storms.

"The idea is to make it more expensive to be big," said Christopher Baker, a credit analyst covering banks at Morningstar.

Too Big to Fail rules

Wells Fargo (WFC) and JPMorgan are the U.S. banks most vulnerable to the new G20 rules, Morningstar's Baker said. He estimates Wells Fargo may need to raise up to $30 billion, while JPMorgan could need $25 billion.

The Financial Stability Board, a watchdog created by the G20 after the last crisis, said total loss absorbing capacity must equal 16% of a bank's assets by 2019. That requirement then rises to 18% by 2022.

Why It's Different This Time, Part 1: Bailouts Can't Save This Fragile System

"It's A Crock Of S**t!" - Here's Why Bill Blain Is Furious This Morning

What happens when you cancel rent, mortgages, and debt?

Richard Branson 'in race to find buyer' for Virgin Atlantic

Where Are the Feds Getting All That Money?

Billionaire Branson Asks For Government Money To Save Virgin Atlantic, Claims He 'Did Not Leave