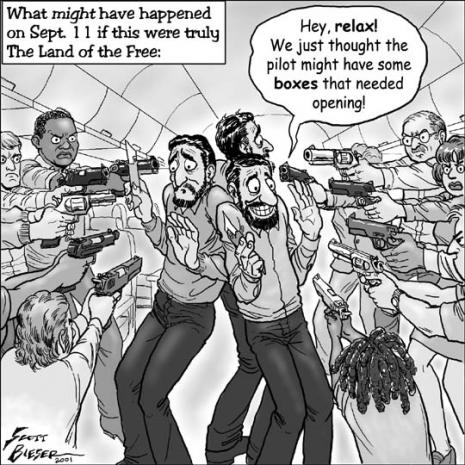 Even in gun friendly states like Arizona or Texas, the muslim jihadis can find soft targets. They currently prefer hopelessly soft targets like France, where routine daily gun possession is essentially banned. Leaving the public defenseless is state policy there, even after repeated threats and prior attacks. Heavily armed paramilitary police get to parade around, after the event, once it's too late, just in time for the camera crews and endless loops on TV.

First let's get the facts straight. These are not terror attacks. These are not extremists. This is the global muslim jihad being waged on the streets of the world. The person currently in the White House, one the main global apologists for the jihad and its muslim perpetrators can say what he wants, free speech and his office allows this, but do not be fooled. And islamists are not "contained," as Barack Hussein Obama stated, just prior to the Paris assault, that's preposterous. No apology for that error has been issued, none is expected.

These people are not terrorists either, like the Irish Republican Army or South American FARQ, as the "news" media constantly labels them. These people are jihadis, dedicated to taking over the world. Terrorism is a tactic, better used as an adjective. Jihad is a noun. Jihadis are people.

Just last evening I told my Wife that the ONLY way the 'terrorists' would get us in Arizona was WHEN WE GO TO COSTCO...