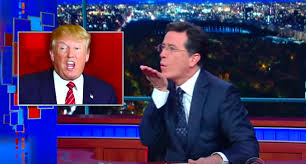 This time, the Republican frontrunner has vowed to ban Muslims — a quarter of the world's population — from entering the U.S. but has offered no specifics on how that might be accomplished.

"How is that going to work?" Colbert wondered. "I'm not sure how the TSA would test you for your religion — though I will say their pat-downs are thorough enough to determine if you are Jewish. Or we could just casually ask people trying to enter the country, 'Hey, I'm trying to recalibrate my compass. Do you know which direction Mecca is?'"

Colbert said no one should be surprised by Trump's latest outrageous but vapid proposal.

"Trump has already proven he's willing to offend every group in America except white people — and frankly, as a white person, I feel left out," Colbert said. "It's his entire electoral strategy. Trump says something shocking, then all of us on TV spend days repeating it, giving him millions of dollars of free air time. So I would rather not give him more of it and simply say that I agree with this bipartisan message from Republican Sen. Lindsay Graham and Democratic Philadelphia Mayor Michael Nutter."

Graham said Americans should tell Trump to "go to hell," while Nutter called him an "asshole."