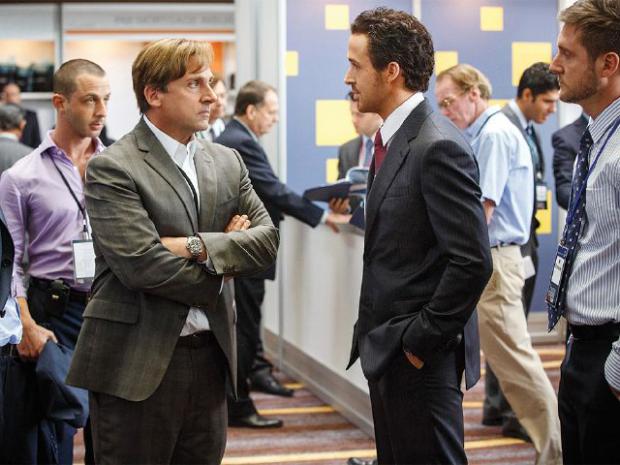 "If you want to tell people the truth, you'd better make them laugh; otherwise they'll kill you."

George Bernard Shaw supposedly said it first, filmmaker Billy Wilder made it his credo, and now, in "The Big Short," writer/director Adam McKay observes this first commandment of comedy.

Like Michael Lewis' nonfiction account of the 2007 mortgage crisis on which it is based, McKay's provocative film is a morality play dressed up as a farce, hilarious as hell and righteously outraged.

McKay, the director of "Anchorman" and "Talladega Nights" and a principal in Funny or Die, is best known as Will Ferrell's partner in comedy. Thus he is a satirist of institutions such as network news and NASCAR. McKay and co-screenwriter Adam Randolph (whose screenplay "Love and Other Drugs" satirized Big Pharma) base their new film on the premise that bankers are the biggest bank robbers of all. As Charles Ferguson titled his excellent 2010 documentary about the banking crisis, the financial upheaval was an "Inside Job."

There is no shortage of villains in "The Big Short," but there are few heroes. Most of the not-exactly-villains were guys who saw that the iridescent real-estate bubble was "the giant lie at the heart of the economy," as the film's narrator, the venal Jared Vennett (Ryan Gosling, a fictional version of Deutsche Bank trader Greg Lippmann) puts it. Interesting metaphor for a movie about so many who had holes where their hearts should be.

Vennett is the ringmaster of this circus, frequently breaking the fourth wall (as do other characters) to address the audience and clarify what actually happened and what is the screenwriters' dramatic conceit.