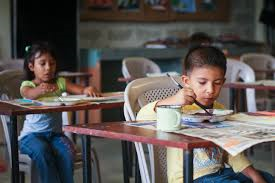 There are regular shoot-outs, and it's not uncommon for locals to find bodies scattered in the street in the morning. To get to the school, students walk along a white dirt road that parallels a fetid canal. On a recent morning there was a 1940s-era tractor, a decaying boat in a ditch, and a herd of goats nibbling gray strands of grass. A cinder-block barrier separates the school from a wasteland—the far end of which is a mound of trash that grew so big, it was finally closed down. On most days, a rotten smell drifts through the cement-walled classrooms. Some people here call the school un lugar de castigo—"a place of punishment."

For 12-year-old Paloma Noyola Bueno, it was a bright spot. More than 25 years ago, her family moved to the border from central Mexico in search of a better life. Instead, they got stuck living beside the dump. Her father spent all day scavenging for scrap, digging for pieces of aluminum, glass, and plastic in the muck. Recently, he had developed nosebleeds, but he didn't want Paloma to worry. She was his little angel—the youngest of eight children.