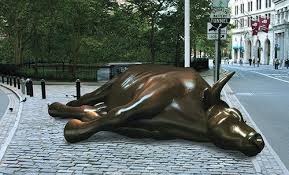 Michael Lewis's book The Big Short is amongmy favorites. When it was announced Adam McKay, the director of "Talladega Nights" and "Anchorman," was directing the film version of what I consider Lewis's second masterpiece (the first was Liar's Poker) I shuddered, remembering the cinematic debacle that was made of Tom Wolfe'sBonfire of the Vanities.

Happily McKay didn't make a mockery of Lewis's work, although, at times, he tried. Lewis admits he's baffled by Hollywood  and didn't expect "The Big Short" to be made for the screen. It's more than ironic the movie begins with the primary subject of Liar's Poker, Lewis Ranieri, who created mortgage-backed securities (MBS).

Very quickly the story jumps to 2005 and Dr. Michael Burry (Christian Bale). Bale plays Burry in all the character's Aspergery quirkiness  (although his condition is never mentioned in the movie or by reviewers). Socially awkward, incapable of understanding analogies and metaphors, Bale nails the essence of the portfolio manager who read the collateralized debt obligation (CDO) legal documents cover to cover with his one eye. He alone understood them to be trash wrapped in nice, shiny Wall Street wrapping.

There was no way to bet against the housing market until Burry went to Wall Street firms asking if they would sell him credit default swaps (CDS), which are essentially insurance policies that pay off with the failure of Collateralized Debt Obligations (CDOs), the close cousin of MBS: Hundreds of mortgages piled together into a impenetrable goulash baked by Wall Street salesmen to exploit the housing boom, promising large yields with gilt-edged status bought and paid for from the ratings agencies.

Lewis's other characters appear in the movie (although under pseudonyms). Steve Carrell plays the obnoxious Mark Baum who (with his team) took some convincing that betting against America was wise.

One of the strengths of the movie has his team hitting the road, touring vacant subdivisions in Florida, and talking to a renter whose landlord was 90-days behind on his mortgage. "That's not going to be a problem for me, right? I'm current on my rent." Baum's assistant could only say, "You might want to call him," as he looked down at the man's young son.

Baum took his research far enough to interview a stripper during a lap dance. While she wouldn't stop gyrating (club rules) to talk to him, she does manage to admit to the portfolio manager she owned five homes and a condo, all fully leveraged.

I suppose the idea of a stripper owning six properties will shock some moviegoers who will assume that part of the story is fiction. It's not. Let's just say in my mid-2000s research in Las Vegas strip clubs, real estate was the primary topic of conversation, to the extent there was conversation.  Plenty of girls even left the jiggle business (where they were making hundreds if not thousands a night) to sell real estate or become mortgage loan officers.