In some ways this has been a 20 year long Fed bubble that leads in a straight line from the "irrational exuberance" of the Dot Com bubble to the Dot Com bust and 9/11 to the Greenspan bubble and the subprime housing run-up to the Global Financial Crisis to QE1/2/3 and ZIRP to the rate hike to today. And what do we have today?

The worst start to the year in US equity markets in history.

Downgrades of economic forecasts from every conceivable corner of the financial world.

Probability of US recession (even with the government's cooked books) the highest it's been in 5 years.

The oil slump getting slumpier as Iranian oil comes online.

The Royal Bank of Scotland warning of "cataclysm" this year and advising investors to "sell everything."

And on and on. You get the picture. But I bet you wish you didn't.

Ironic, then, that in the midst of this beginning-of-the-end of the 8 year long QE re-leveraging heroin binge we have news that seems to put a bow on the 2008 crisis: Goldman Sachs has announced that it has reached a $5.1 billion settlement as its wrist slap for participating in the wholesale swindle that was the subprime mortgage meltdown. The settlement breaks down into $2.385 billion in civil monetary penalties, $875 million in cash payments and $1.8 billion in consumer relief. 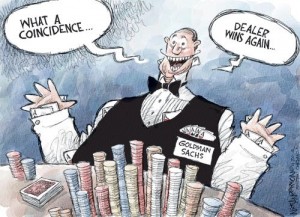 Here's the kicker: the settlement is the largest in the bank's history, but still small potatoes compared to some of its cohorts in crime who have already reached their settlements, such as Bank of America ($16.6 billion) and JPMorgan Chase ($13 billion).

For those who don't remember the subprime mortgage meltdown and Goldman's role in it (along with the other big banks), they intentionally blew up the housing bubble by creating Structured Investment Vehicles to keep mortgage backed securities and other risky investments off their main books. This allowed them to raise money on the commercial paper market at low interest rates and earn high interest rates by buying toxic subprime mortgage securities. Then they paid off the ratings agencies to AAA certify their toxic mortgage CDO garbage.

Then (and here's the psychopathic genius of it) knowing that it was all going to melt down sooner or later, they pawned the subprime-backed derivative garbage on their customers at the same time as they secretly bet against it. Internal emails released in subsequent investigations show they referred to their own CDOs as "sh***y deals" and called their customers "muppets" for buying them.

The end result? Goldman had its most profitable year to date in 2007 as the market started to turn with a staggering $17.6 billion profit. By 2009, in the depths of the crisis that they helped bring about and as the rest of the world faced total financial armageddon, they did even better, netting just shy of $20 billion profit. 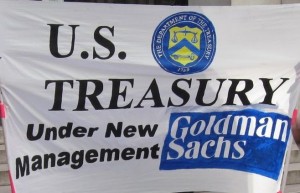 So, just to recap: Goldman makes tens of billions by selling the very toxic assets they were secretly betting against and in the end they pay a $5 billion penalty.

…Oh, and (needless to say) the Injustice Department practically fell over themselves to announce at the earliest possible opportunity that no one would even be prosecuted for this fraud (let alone go to jail).