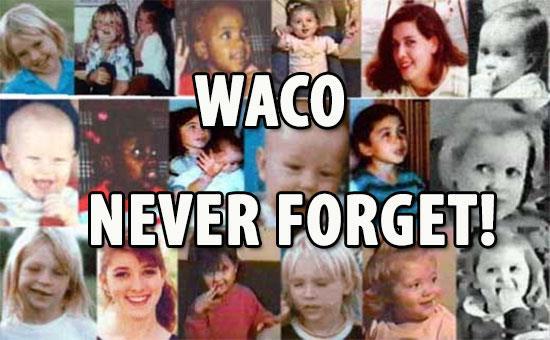 "Warning to U.S. Military and Federal LEOs: Do Not Follow Orders to "Waco" Ammon Bundy Occupation, or Risk Civil War"

Of particular interest to me is Stewart's use of the name "Waco".

On April 19 in 2016 the nation will reflect once again on Waco. The date will mark the twenty-third anniversary of one of the most cruel, insane, and even demonic actions ever perpetrated by the U.S. government upon its own citizens. It is not the only cruel and insane event done by government to the governed, but it is one of the most horrendous.

As an older man I recall seeing the burning of that church in Texas while at a restaurant in Georgia. The entire restaurant was glued to the TV screen in disbelief. All we had heard was that the church had been molesting little children and manufacturing illegal drugs. That, a sickened nation would later learn, was a pack of lies made up by the ATF and presented to the Pentagon in hopes of getting military aid in resolving the standoff which resulted from the botched raid on the church.