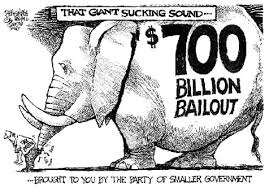 More and more analysts and commentators have caught to the fact that the Powers That Be are actively preparing for the next financial crisis with even more extreme measures.

As we've been noting since 2013, the template for this process was first laid out in Europe, specifically in Cyprus. With that in mind, it's worth remembering just how it played out there.

The quick timeline for what happened in Cyprus is as follows:

·      November 24, 2012: Cyprus announces it has reached an agreement with the EU the bailout process once the troubled Cyprus banks are examined by EU officials (ballpark estimate of capital needed is €17.5 billion).

It is at this point that things went into hyper-drive.

The most important thing I want you to focus on is the speed of these events.

Cypriot banks formally requested a bailout back in June 2012. The bailout talks took months to perform. And then the entire system came unhinged in one weekend.

One weekend. The process was not gradual. It was sudden and it was total: once it began in earnest, the banks were closed and you couldn't get your money out (more on this in a moment).