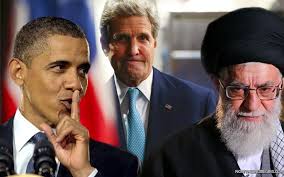 The Obama administration has spent three years engaged in secret talks with Iran that resulted in the payment of nearly $2 billion in taxpayer funds to the Islamic Republic, with more payouts likely to come in the future, according to a recent letter issued by the State Department and obtained exclusively by the Washington Free Beacon.

The administration's disclosure came in response to an inquiry launched in January by Rep. Mike Pompeo (R., Kan.), who was seeking further information about the Obama administration's payment of $1.7 billion in taxpayer funds to Iran, which many viewed as a "ransom payment" for Iran's release that month of several U.S. hostages.

The administration's official response to Pompeo was sent earlier this week, just days after a Free Beacon report detailing a months-long State Department effort to stall the lawmaker's inquiry.

"We apologize for the delay in responding," Julia Frifield, an assistant secretary for legislative affairs, states in the letter's opening.

FLASHBACK: Trump Predicted Obama Would Attack Iran To Get Re-Elected

Barack Obama welcomed leader of US embassy attack to the White House: