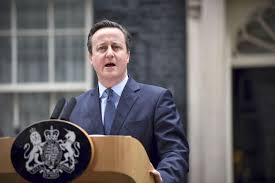 Recently, David Cameron presented to the British public his White Paper on whether the UK should remain in the EU, in preparation for the June referendum. For those who are unfamiliar with the referendum, it's intended to resolve the degree to which the UK caves to an unelected uber-government in Brussels in trade for purported benefits of an all-Europe trade partnership, or whether it chooses independence—going through the hard work of creating individual agreements with EU countries, but gaining the ability to unilaterally make its own decisions regarding such weighty issues as migration, borderlessness, human rights, etc.

The migration issue is a major one. After much hand-wringing between the UK Government and the EU, a settlement has arrived at that Brussels says it won't budge on. In order to retain the UK in the EU, it will grant a seven-year holiday on full access to in-work benefits by newly-arrived migrants. In his White Paper, Mister Cameron presents this "emergency brake" as a major concession that he has achieved with the EU. However, what this concession really means is that the UK will bear the blows from a smaller cudgel for the next seven years, after which the larger cudgel will be employed on a permanent basis.

He seems a bit baffled that British citizens are not impressed at his achievement, and it's this character flaw that separates him (along with other political leaders) from the British people: he truly doesn't "get" why the populace is not pleased to be temporarily beaten with the lesser cudgel for a limited period, followed by thepermanent use of the larger cudgel.

To the average citizen, this should be easy to understand, yet this character flaw is the norm amongst not only British politicians but virtually all career politicians everywhere.

In my years of working closely with government leaders (and would-be leaders) from my own country and internationally, I've learned over time that there's a mind-set that's common to those who have made politics their life's work. They think fundamentally differently from businesspeople who learn to make thingswork both practically and economically over an extended period. The latter must do so, or go out of business. Political leaders, however, don't have this restriction. For them, the job is not one of being profitable and effective in satisfying the public with a good or service. For them, profitability is irrelevant.Further, they need not satisfy the public; they need merely to succeed inimposing their programmes onto the public.

Politicians approach life from an entirely different viewpoint from businesspeople and businesspeople almost invariably fail to understand this. Although a former businessman who has entered public life may be able to place a foot in each camp successfully, those who enter politics early on, or those who have an initial career in the Civil Service but later switch to politics, lack the fundamental understanding of the workings of economics and the free market.

They don't so much seek to undermine the free market as much as they simply don't recognize its relevance. (This, understandably, is a fact that businessmen find hard to acknowledge or adapt to when dealing with political leaders.)

Career politicians assume that the nature of leadership is to burden the populace with legislation and taxation. They truly don't understand the concept of limited government. It's an absurd anomaly to them, so the question is therefore only the manner in which they burden the populace. Lessening the burden is simply not an issue. Whilst they understand that voters wish to be told that the burden will be diminished, it's not by any means the intent of leaders to do so. In a politician's mind, the purpose of the existence of the populace is to fill the trough for the leaders. And, of course, the fuller, the better.